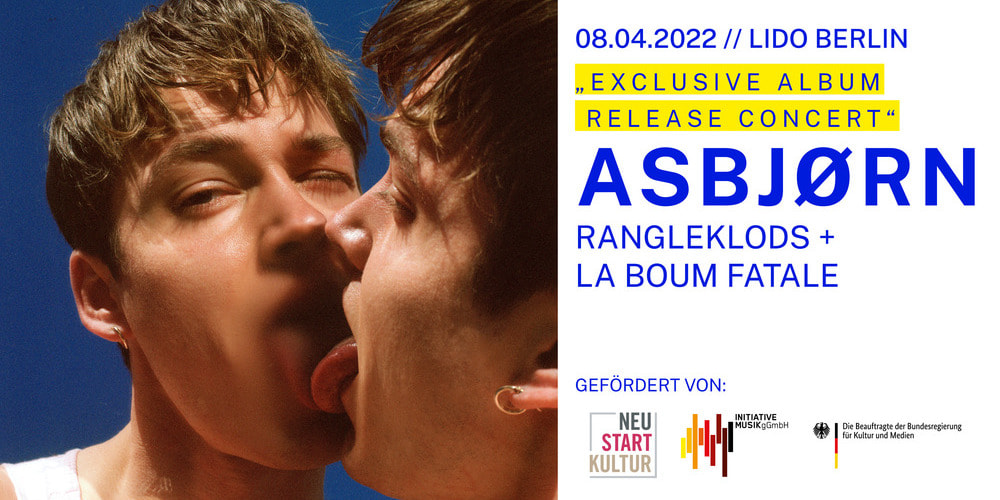 ASBJØRN
Ever since the 2012 debut Sunken Ships, Asbjørn has been a poster boy of the unconventional. His self-exposing lyrics offer radio-length sex education wrapped in adventurous yet highly infectious pop production and creating waves of critical acclaim beyond the shores of his native Denmark. “I remember looking at this beautiful audience in Berlin, seeing the diversity and identity freedom of my fans, and thinking; this feels like home. This is a place where I don’t have to fight for the right to be me”, says Asbjørn, who made Berlin his home from 2014-18 and toured Germany tirelessly, including shows at Berlin Festival, TV Noir and Electronic Beats.

For his return he will exclusively premiere songs from the new album Boyology (out January 28 via Embassy of Music) and he’s bringing his friends to celebrate.

One-man electronic army Rangleklods is back where it all started: Berlin.

Rangleklods came to life in the early 2010s when Esben Andersen moved to Berlin and started playing in makeshift basement bars and small beat up venues. While exploring the diverse Berlin nightlife he found his own voice in between the dark clubs and the alternative pop scene. The result is inventive and groovy electronic pop music. It’s highly melodic, melancholic and drenched in pulsating beats that alternate between moments of chaos and complete sonic control. During live shows Rangleklods play as much of the electronics as possible, utilizing modular synths and custom built machines while delivering charismatically deep, crooning vocals. The performance is intense and spontaneous, and it is no wonder it has captivated crowds all across Europe.

Since forever, Antonio de Spirt has been a multiplier, a collaborator, a social project almost as much as a musical one. Accordingly, his catalogue as La Boum Fatale is a testament to cooperation, creative exchange and musical friction. Four years after his last album, the feature-rich HOLYGRAM, this ever-expanding universe returns as a powerful and intense concentrate. Less collabs! More friction! SCENT OF GRAVITY got released in March 2020 and is a reflection on electronic music, on its building blocks and inner workings, its ambitions and its shortcomings, its arcs and oscillations, its steep drops and cliffs, its brutal lows, burning heights, scapes and stabs and glittering arps. Its music as a weapon, as jewelry, as a library. It is therefore perfect music for warriors, collectors and scholars. It is also really good.

SCENT OF GRAVITY will be performed together with his forever collaborator PETULA for the first time ever since its release.